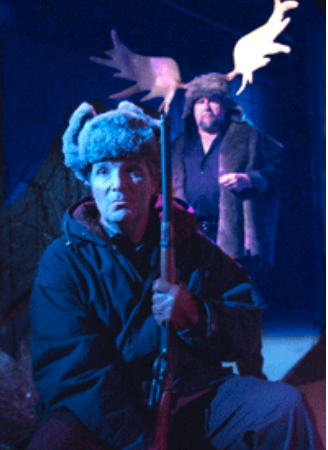 From the evening of Friday, June 3 to the afternoon of Sunday, July 24, 2011, the audiences of Los Angeles were treated to the extended run of Dina Morrone’s engaging and thought-provoking new play, Moose on the Loose. I had the very distinct pleasure of attending the opening night and its final performance, whereupon I realized the magic that this theatrical production is capable of creating.

It might seem unlikely that a two-act play written by an Italian Canadian about a displaced moose and displaced Calabrian immigrants in the fictional town of Way Up Bay – inspired by the playwright’s hometown of Thunder Bay – could have a successful run in Hollywood. That it should enjoy an extension of a further two weeks must seem almost incredible. Yet, that is exactly what happened over the months of June and July at Theatre West.

This internationally acclaimed nonprofit arts organization located in Hollywood is also the oldest continually running theatre company in Los Angeles that boasts many awards, numerous Hollywood legends among its alumni, and innumerable first-rate performances. When these elements are combined with a first-rate cast and production crew, the results are sure to be superlative − from Stage Manager Peter Cruz, to Producers Zeke Rettman and Stephen Rivkin (yes, that one, of Avatar and Pirates of the Caribbean fame!), to Director Peter Flood (Walt Disney Studios, Miramax, National Geographic Films, Universal Pictures). The equally impressive cast, whose credentials in film, television, and theatre make them recognizable to the audiences, accentuates the star quality of this production.

As Dina said in an early interview, “casting began nearly two years ago when we did a very first reading of a twenty minute version of what the play has now become. Everyone was perfect. I would not settle for what was not right. I had to stay true to what I believed about the characters. I am thrilled with my outstanding cast. They are all a true blessing.”

Over the course of its extended run, the troupe became progressively more comfortable with their roles. In an interview after the last performance, Dina declared, “We got tighter and tighter, and suddenly we WERE the family and not just acting the family. I have never worked in a play or with a cast like this. We would all huddle around before the show and hold hands, all the actors, the producer and the director, and we would empower each other. It was so grounding. And we were all in a great mood because we knew we were going out there as a family and to represent a family. Many families. We all cried the last weekend. It was so emotional.”

Moose on the Loose is a comedy about an Italian family, a Canadian moose, and the concept of displacement. It was written by Dina Morrone (also portraying the character of Gina) who was inspired by true events in her native city of Thunder Bay, Ontario. One day, when speaking to her mother on the phone from Los Angeles and discussing mud slides, fires or other typical natural disasters in the Southland, her mother reminded Dina that in Thunder Bay, despite the snow and cold, the worst that could happen is a moose wandering into town and onto a neighbour’s property. In fact, this had apparently just happened to the Polish family that lived up the street from Dina Morrone’s mother.

That true event inspired the current play, where the disoriented moose becomes the prevailing metaphor. While Dina Morrone knew she had something unique and funny here, she also knew she was “touching on some very universal themes that people of all cultures can relate to.” The personal history of her own family’s move from Calabria to Thunder Bay informs this comedy in a touching, funny, quirky way that stirs numerous emotions in its audience. My very good Italo-English friend, with whom I saw the opening performance, was moved to tears by Nonno’s monologue, right after a thorough belly-laugh.

Way Up Bay is depicted as a potentially inhospitable place for Calabrian immigrants, who saw their southern Mediterranean climate replaced by the relentless cold, snow and ice of the Great White North,  where English, Italian, Polish, Ukrainian, Finnish, and aboriginal languages and cultures coexist.

To convey that sense of disorientation, the moose (portrayed alternately by Eric Allan Kramer and Tom Badal) refers to these odd and bemused people way up north with references to Ojibway myth, all the while carrying himself with the deliberate dignity of that most majestic and imposing creature of the north. Despite being trapped in the yard of the Tappino family’s Polish neighbour, we discover that it is not the moose but the Tappinos and the other immigrants who are the ones who are displaced.

From its opening scene, Moose on the Loose offers the classic Italian Canadian winter scene: the Tappino family is in the kitchen cooking, talking, reading, and glued to the Weather Channel for updates on the inhospitable climate outside the family’s front door. They are awaiting the return of Gina, the “wayward” older daughter who left home years ago to pursue a career in the mysterious field of “mahrketeeeeng” and jets around the world with frequent stays in Rome and infrequent returns home.

With nonno Rodolfo (Jack Kuther) and nonna Pina (Laura James) present, Giuseppe and Maria (John Cygan and Connie Mellors, respectively) bicker over grappa, snow, and whether or not to go out and shoot the trapped moose. Sons Joseph (Nick McDow) and Bruno (Johnny Ferretti) provide insights into the younger generation’s interests. Joseph is studying to become a nurse – to the puzzlement of the family that sees this as a female career pursuit. Bruno, aka “Meester Stuckatoathecoucha” only gets up to stealthily lower the thermostat inside the home. With the arrival of Gina’s younger sister Carmela (Corinne Shor), Anglo-Canadian husband Darryl (Michael Lorre), and their young son Timothy (Grant Venable), the family dynamic takes on fuller dimensions, with references to sibling rivalries and inter-linguistic miscommunications.

When Gina arrives after a 30-hour series of flights, missed connections, and lost luggage, the story develops further intrigue. Gina is harbouring an important secret that may upset the established family dynamic. With grandparents, parents, children and grandchildren on stage, the four generations of Italian Canadians reveal their corresponding levels of attachment to old-world ways – in broken English peppered with Calabrianisms and “italiese.” When Bruno’s First Nations girlfriend Honabigi (Jemma Bosch) arrives, we get yet another side of the cultural and linguistic potpourri of Way Up Bay. Revealingly, it is through Darryl and Honabigi – the “outsiders” in this Calabro-Canadian family – that the audience understands the intended meaning of displacement. It is to the cast’s credit that these generational and cultural distinctions are portrayed so effectively.

Whether arguing over the neighbours’ “unpronounceable” English names like Timothy, the telephone, about Giuseppe ending up in jail (“eeenna jaila”), or the loose moose, Dina Morrone’s play shines with wit, verve, and good-natured double entendres, concerning beaver and bush, that makes for a very satisfying comedy. As difficult as it may be to convey to an LA audience, this troupe manages to communicate distinctions between Italian Canadians and Italian Americans without going too far over the top. Although the occasional “eh’s” and “aboot’s” do stand out, the detail of hockey references, Tim Hortons coffee cups, Molson Canadian, and the preoccupation with the weather are spot-on Canadian … and Italian Canadian, to boot.

Along these lines, Dina deftly makes an oblique reference to Darryl’s particular ethnic group by mentioning their passion for eating cake, thereby not having to struggle with a foreign derogatory term that no one here got. In other words, certain Italo-Canadianisms had to be reigned in “not to ruin the humour by making it too inside only for Canadians.” Given the amount of laughter in the theatre, Dina’s recipe seems to have worked very well, indeed.

Ever a perfectionist for realistic detail, Dina seems to be bearing the torch for this truthful portrayal, when she has Gina’s first appearance on stage characterize the removal of layers of clothing and boots, immediately bending down and wiping up the imaginary snow from the spotless Italian Canadian kitchen floor. No Italian Canadian would ever forget that important repeated winter ritual, this reviewer included.

If you’re looking for Sopranos or Jersey Shore references, gumbas and guidos, fuhgeddaboudit! If, on the other hand, you are seeking a warm, heart-felt portrayal of the immigrant story with poignant implications that will make you laugh and cry in almost the same breath, you must spend the evening with the Tappino family and the loose moose in Way Up Bay.

The good news is that this play should be headed up north in the near future, where cities like Toronto and Montreal top the list. Dina Morrone is looking forward to working with her Italian Canadian counterparts, since she knows that “Canada has an abundance of actors who will be perfect for the roles.” We may be exposed to more unrestrained Italo-Canadianisms then. There is also talk of publishing this play with a distinguished Canadian or American house as well as enthusiasm for a screenplay.

From its somewhat unlikely beginnings, Moose on the Loose may be coming to Canada with expectations of an equally successful run. As farfetched as it may have appeared at first glance, Dina Morrone’s Italian Canadian moose play was as good a fit in LA as a “double-double” at a Tim Horton’s on the 401. Shortly, we may be able to aptly compare its success to a “Persian” at Nucci’s in downtown Thunder Bay: sweet, unique, and highly addictive!

Robert Buranello received his Ph.D. from the University of Toronto. He is Musco Professor of Italian at Chapman University in California.