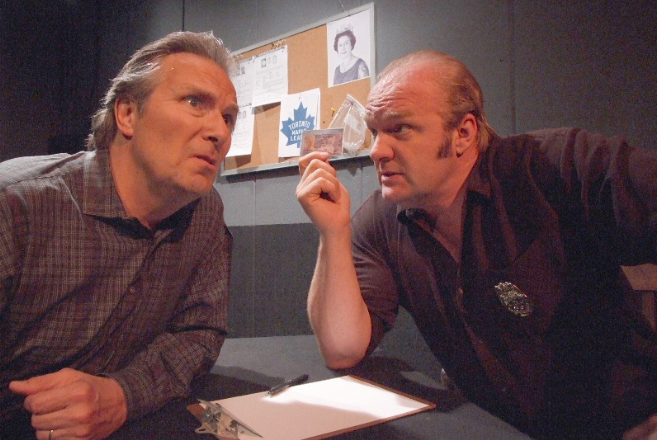 Moose on the Loose at Theatre West is a comedy spinning on the questions of who are we, where are we, and where are we going -- questions that are grounded in the stories of four generations of an extended family of Southern Italians who’ve ended up in a small town in North Ontario, and as in the Neil Young song of that place, have become as the play opens, helpless, helpless, helpless. They’re Italians who planned to be Americans, but ended up in Canada. There’s the fatherly head of the family whose potency has faded; he’s unemployed and literally can’t shoot his gun. The first-born son dropped out of college and watches TV all day back at his parent’s home. The youngest son remains on the verge of coming out of the closet. The glamorous daughter comes home to the little town after work and pleasure in Italy have taken their toll. There’s another daughter, domesticated, with a young son and an English husband who drinks tea instead of manly espresso.

There are a lot of parts, maybe 12, from the old great-grandparents to the great-grandson, and, yes, a talking moose that the father is arrested for sort of threatening to shoot and which the whole village saves from a fall. It being a comedy of family relations, things get better for all of them once they get some stuff off their chests. Surprisingly for the Italian genre, it’s not all that romantic; the love staged on the realistic set of a modest home interior is of the familial sort -- quick to turn to irritation, acceptance, memories, and sharply funny tongues.

The script, full of laughter and kindness, is by Dina Morrone. The inspired staging and timing come from the assured direction of Peter Flood. The actors are all excellent, especially Tom Badal, one of two alternating actors portraying the wise and patient moose/police chief, Grant Venable who celebrated his 10th birthday at the performance I attended playing the lone child with the greatest of ease, and Morrone herself in a layered performance as the homecoming daughter Gina.

The whole family ends up at the kitchen dining table like at the emotional conclusion of Moonstruck, shared food being the reconciliation they all crave, while the moose looks in from the outside and assures us in the audience that all will work out.

-Mark Share (This email address is being protected from spambots. You need JavaScript enabled to view it. )