Jackie Houchin- MOOSE ON THE LOOSE, A Wise and Funny, Feel-good Play 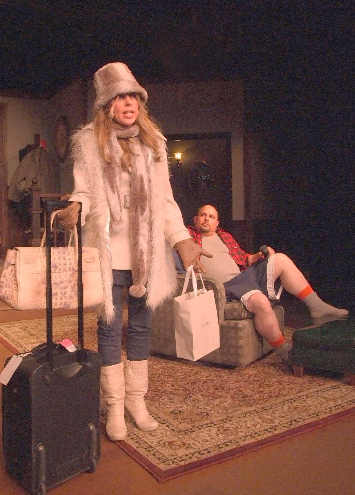 Based "loosely" on a true story, according to playwright Dina Morrone who also has the role of the oldest daughter Gina, "Moose on the Loose" is a delightful and insightful comedy about family, about culture clashes, and about Old World tradition versus the "modern way" of thinking and doing things.

The play is light on plot, with no more complication than a daughter's surprise visit and the father being waylaid for a mild infraction, but it is nevertheless rich in character.

"Character-driven comedy," according to director Peter Flood, "is where behavior is the story and every character is given time to be seen, heard and remembered." By the time "Moose on the Loose" ends, each character will seem like family to you...even the moose.

The story is about an immigrant Italian family living in the far, far north of Ontario, Canada (the show actually opens with the recorded singing of O, Canada) where the most exciting thing on TV is the Weather Channel.

Later, the oldest daughter Gina will arrive, as will her sister, Carmela (Corinne Shor) with her Canadian husband Darryl (Michael Lorre), and their young son Timothy (Grant Venable).

Finally we will meet Bruno's Native American girlfriend, Honabigi (Jemma Bosch) who is as nonchalant about her heritage in this strongly Italian family, as Darryl is uptight about his. Eventually...well, at the end...they will all congregate around the dinner table in true Italian style.(Actress 4th from the right is Mary Garripoli as "Maria.")

But first, we meet the Moose.

We're told that a moose can stand seven feet at the shoulder, weigh close to a ton, and have a six foot antler span. Tom Badal (in the performance I saw; it's double cast) isn't quite that massive, but he projects the image wonderfully. Tall and stout and wearing a fur coat and ear-muffed cap with an impressive set of antlers, he moves onto center-front stage with lumbering dignity that befits his "kind."

In a deep, rumbling voice and in simple phrases, he greets the audience, tells a few mild animal jokes, and introduces each of the characters in the play. As he returns to the "bush" the lights come up on the Tappino home, and you can almost smell the bread and lasagna baking.

From the Weather Channel, which Bruno watches constantly, we learn that a blizzard is on the way. From Maria, we learn that Gina is coming home from her world travels for a surprise visit...and staying for a year. A year! The two older generations argue about her life and all the reasons she may have for coming home (none of which is accurate, which we will later discover).

In the midst of the "discussion" a bottle of brandy, which grandpa had been adding to his coffee gets spilled onto Giuseppe's lap. He has time only to brush it off before a phone call alerts them to a moose that has wandered into their neighbor's yard and gotten stuck. Giuseppe grabs coat, hat, and rifle and goes out to "shoot a moose." While the family complains loudly we hear a distant siren.

In a rare quiet moment, the wayward Gina arrives, freezing and complaining about air travel. Bruno listens (from his spot in front of the TV) and commiserates. In a candid confession, she reveals her secret. Oh, dear!

Outside, Giuseppe encounters our moose who says he wouldn't like to be shot. Giuseppe begins a woeful soliloquy about taxes and work and providing for his family as the moose slips away. Only to return as a police chief. Somehow, Badal's impressive size and sincere demeanor work perfectly in the town's sole law officer. A gun in city limits and the smell of liquor (remember the brandy?) force the gentle chief to take Giuseppe in. A further problem lands him in jail.

Who is his "one call" to? Soon the whole brood is packed into the waiting room of the police station, where, amid blistering banter and accusations they begin to learn the truth about family, solidarity, acceptance (believe me, Gina's confession stretches tradition further than any in Fiddler on the Roof ), and love.

"Moose on the Loose" is a heart-warming, feel good play that will leave you smiling and ready to watch it again.

John Cygan and Connie Mellors give stellar performances, especially Mellors who had to step in only a few days before opening to replace a seriously ill actress. Despite her being "on book" which was hardly noticeable after a few minutes, she easily carried the action, the accent, and the heart of the role. Cygan's Giuseppe was at once blustery and tender, a narrow line which he walked perfectly.

Laura James and Jack Kutcher's roles as the Old World grandparents were completely believable to anyone who knows an older couple who've been married many, many years. The bickering, the interrupting, the totally Italian (and hilarious) hand gesturing... well done!

Catch the "Moose" before he gets away!